E-bikes are currently big news. The explosion in sales over the last few years is frankly staggering. E-bikes in some European countries are now outselling standard bikes. Wow! Who would have thought?

So, why the huge interest and popularity?

One reason is because of the increasing hostility of city planners towards automobiles. This is forcing more and more people out of their vehicles and either onto public transport or onto their bikes. Another reason is due to the number of older cyclists who are returning to two wheels and are opting for e-bikes for an easier ride.

Given e-bikes huge health benefits and cost savings, it’s not a bad trend to be into.

So, let’s get this Swagtron SWAGCYCLE PRO Review underway and see just how well it holds up… 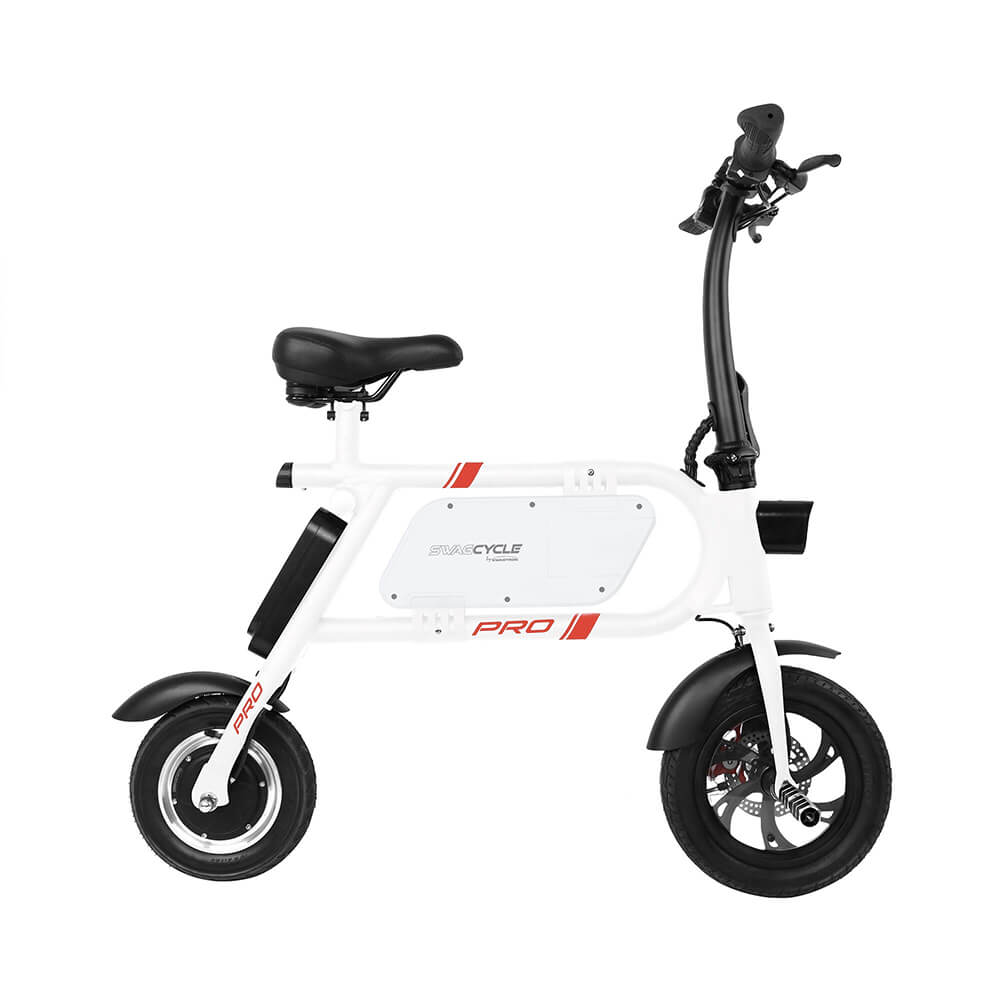 The frame is all-aluminum. It’s well made and well finished and strong enough for the job. This is only a small bike, but it still has a weight limit of 264lbs, which is more than sufficient for the majority of people. However, given that the Swagcycle Pro is so compact, it’s highly unlikely anyone heavier would want to ride it anyway.

We give the Swagcycle Pro close to full marks for the frame, but sadly the same can’t be said for the rest of the bike. There are two main areas where we feel the bike falls a little short.

The first thing we’d like to see an improvement is with some of the accessories. The brake levers, LED lights, and battery cover, could all be better. They look OK, but they feel too flimsy. A little extra money spent could have easily elevated the overall quality of the bike.

Secondly, we’d like to see a change in the waterproofing. The Swagcycle Pro is only weather-proof. It has an IPX4 weather rating. Frankly, this is not enough.

This is a bike, so we expect that you should be able to use it in any weather condition. Like, say, a normal bike! Good people of Swagtron, you need to sort this out.

The bottom line is that the build quality is very fair and about what you expect for an entry-level electronic bike. However, for very little extra money and effort, we think this could be so much better.

The Swagcycle has no pedals. Consequently, we probably define it as being a bit of a cross between a bike and a scooter. The lack of pedals is going to be fine for some but an all and out deal-breaker for others.

The problem with being pedal-less is that you are 100% dependent on the battery for getting you around. If the battery fails, you’re faced with a walk home or a call home to someone to pick you up. Neither option being ideal.

One of its best features is the dual disc brakes. The stopping power is excellent. Even at full speed and in poor conditions, the brakes give you consistent and sure-footed braking.

Other nice features include the front and rear integrated lights. They look cool, but as we touched on earlier, the quality could be better. The same goes for the horn. It’s a nice idea, but it’s simply not loud enough. It’s another example of the poor execution of the design.

Features that are also nice haves but appear to be better thought out include the rear kickstand and the USB port. The kickstand is just the right size to keep the bike in place when in use but not get in the way when folded away. The USB port is well placed and easy to access.

The Swagcyle Pro doesn’t have the ride and handling feel of a normal bicycle. This is mainly because you place your feet on two pegs over the front wheel. In many ways, it’s more like riding a chopper than a bicycle!

The feet position feels unnatural for a bicycle and does little to improve handling. The fact is that it takes some time to get used. It’s not too bad, after a little practice, but just don’t expect the same kind of handling that you get from a normal bike.

Another point to keep in mind is that this isn’t a great bike for taller riders. This is because there’s no height adjustment on the saddle. Plus, although there is some handlebar adjustment, it doesn’t compensate for the lack of seat post adjustment.

Would it be so hard to make the bike with a movable seat post? We don’t think so, and it would make a ton of difference. Because of the limited level of adjustment, we think anyone near to 180cm is going to find this uncomfortable and difficult to ride.

Swagtron recommends a height limit of 6’. As with a lot of manufacturers’ claims and recommendations, we think this is optimistic. We suggest tall riders give this one a miss.

Another issue we have with ride and handling is the small wheels. Honestly, the wheels won’t do you any favors over rough ground. They make the ride uncomfortable over bumpier surfaces. You need to stay on smooth roads and paths, or your backside will suffer.

The reality is that this is most probably where you’ll do most of your riding anyway. Which is just as well. Over short journeys and good roads, you’ll be fine. Otherwise, you should consider another option.

How fast it can go, and the practical range are the most common questions people ask when looking at e-bikes. We think the same.

So, let’s start by looking at the technical data of the Swagtron SWAGCYCLE PRO…

Right out of the box, the bike is limited to a maximum of 10mph. If you want to bump up the speed, via the app, you can select a higher maximum speed of either 15mph or 18mph.

In more built-up and busy areas, it’s not a bad idea to keep your speed limited to 10mph. If you choose to use the bike on longer runs and in less built-up conditions, then 18mph begins to make sense. However, be prepared for your top speed to fall a little short of the manufactures’ claims.

An ideal range for a ride…

The Pro has an extended range over the Classic, with a maximum range of 15 miles, whereas the Classic has a range of just 12 miles. It’s not a great deal, but dependent on your circumstances, it might be enough to persuade you to open your wallet a little wider and swallow the additional cost.

Be aware that the predicted battery life is a little ambitious. If you ride the bike around at full gas and on gradients, you’re unlikely to get anywhere near this headline figure.

Rely on the app…

To help you keep a track of your battery life, there’s an LED light indicator on the handlebars. It sort of does an OK job, but it’s not particularly accurate and can read erratically at times. If you need a more accurate figure, we recommend you rely on the app instead.

For shorter rides, we’re happy to rely on the LED lights. On longer rides, we prefer the app.

Other things you can do with the app include monitoring and recording your distances, average times, and speeds. It’s probably not something that we’d use, but it’s maybe useful for some of you.

The battery can be fully charged in around four hours and can be charged through any domestic power socket. It comes with a recharging cable provided. One last improved feature you get with the Pro version is that it has a concealed compartment where you can store the recharge cable.

The Swagcycle Pro is not the most portable electronic bike. It’s not a fold-able bike, so it’s unfair to criticize it too much on this score. If you need something genuinely portable, to take on a train or a bus, you need to look elsewhere.

Despite not being able to fold it, you can still easily fit it into the trunk of most small-sized sedans. The handlebar stem can be lowered, which makes more than enough space to make this possible.

Looking for other e-bike options?

And for those that want to DIY, you should take a peek at ou reviews of the Best Electric Bike Conversion Kits you can buy in 2022.

The Swagcycle Pro has some nice upgrades from the Classic. We like the increased top speed, but we like the extended range more. The hidden compartment for the battery charger is pretty cool too.

In the end, it’s the great versatility and its affordability that tops our list. It’s a great fun little bike too.

Enjoy your bikes, and enjoy your rides.