Ignoring a battery or trusting your car’s alternator to keep it charged is a recipe for disaster. Who hasn’t been late for work or school because of a dead battery? But there’s a better way.

Batteries use chemical reactions to produce electricity (more on that later), but those reactions require maintenance. Early chargers made users set and monitor their functions, but today the best car battery charger can do it all on their own.

NOCO’s Genius line of chargers are some of the most versatile battery chargers on the current market. Like most smart chargers, the Genius is equally good at charging flooded or VRLA (valve-regulated lead-acid) batteries. Genius chargers don’t just charge conventional batteries, though.

While the lead-acid battery (including maintenance-free types) has been ubiquitous for many years, the 21st century has seen the rise of a few rivals. Lithium-ion batteries charge quicker and weigh much less than lead-acid batteries, but normally require a dedicated charger. The NOCO Genius charges both lithium-ion and lead-acid batteries. Plus, it is safe for CAN bus systems (DC-port charging), as well as start-stop and hybrid engines.

Multifunctionality is what Genius chargers are all about. The automatic repair function will reverse the build-up of lead sulfate on a battery’s coated lead plates. This re-suspends the lead sulfate in the electrolyte, restoring the battery’s internal chemistry.

The charge rate on Genius chargers switch through three phases: bulk, absorption and float. It will also maintain a battery at full charge indefinitely, but then, most modern smart chargers do that. Few have the added functions of Lithium-ion and CAN bus port compatibility, though. 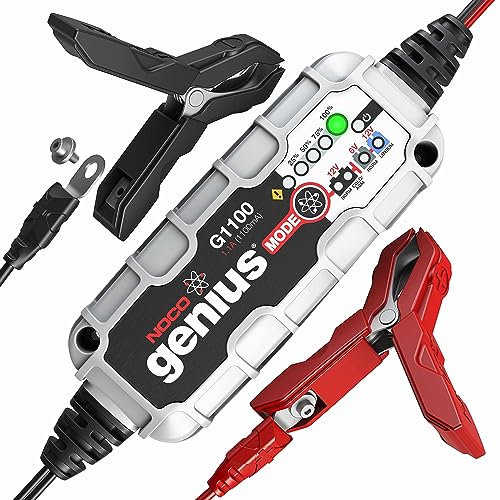 When your name is synonymous with trickle chargers, you know you’re doing something right. There is a reason many home mechanics refer to all these devices as “Battery Tenders.” In fact, there is not much apparent that differs from the original Battery Tender. But what’s inside is all modern.

The Battery Tender Plus charges all lead-acid, 12-volt batteries at 1.25 amps. It does this in four stages, beginning with initialization and moving on to the bulk-charge rate. It stays in this mode until the battery reaches 80-percent charge, when it switches automatically to the absorption stage.

After the charger reads that the battery is nearly fully charged, it enters the float-charge phase. It can stay in this last stage indefinitely. This is how the Battery Tender Plus maintains a fully charged battery without overheating or overcharging it.

The Battery Tender Plus notifies the user of its current mode through lights that can be either red or green, and can flash or remain constantly lit. There really isn’t anything for the user to do, though. This is a truly automatic battery charge from the company that modernized battery charging. 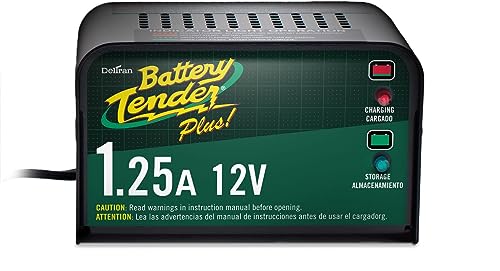 Schumacher’s SE-4022 is suited for bigger jobs and busier garages. Able to charge 6- or 12-volt batteries at 2-, 10- and 40-amp rates, this wheeled unit is great for professionals and shade-tree mechanics alike.

How does it handle heavy workloads?

When it comes to regular use, heat is any charger’s enemy. Overheating can lead to overloading circuits and an early demise. The SE-4022 has an internal fan to keep temps down, and it has overload protection so it shuts down before permanent damage to its heavy-duty transformer or circuits can occur.

This charger also features a 200-amp, engine-start function that will get even dual-battery diesel trucks rolling when their batteries can’t crank their engines. However, it won’t do any of that without some user knowledge.

Unlike many modern battery chargers, the SE-4022 has no automatic functioning. There is a dial timer that the user must set, which prevents overcharging but won’t monitor the charge. If you’re the type that needs help getting your battery up to snuff, this might not be your charger. But for mechanics that know their stuff, this Schumacher offering has power to spare. 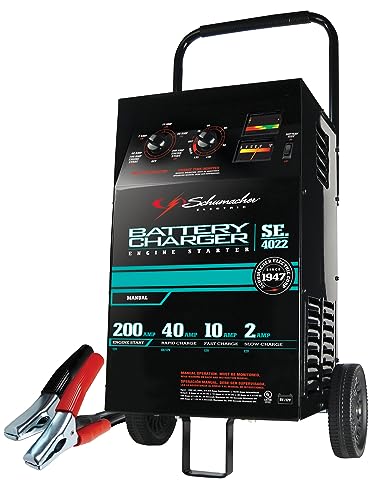 This Stanley product is a fully automatic bench charger with four separate modes of operation. A simple yet efficient charger, it requires just a push of a single button and takes care of the rest. It charges any lead-acid battery in three stages, switching from fast-charge to top-off to trickle-charge modes as needed.

But it can do more.

The unit also comes with an alternator-check function to ensure the battery is getting its full charge as your engine runs. It can also recondition batteries that have a build-up of sulfate on their lead plates. Finally, it has a 75-amp engine-start mode to get you on the road in a hurry.

The LCD display is intuitive and easy to read. It shows both a percentage of charge and the current charging rate, as well as displaying the battery’s voltage. But when it comes to its main job, this charger is as no-nonsense as it gets. It detects the battery type and adjusts the charge accordingly, eliminating operator error from the equation. 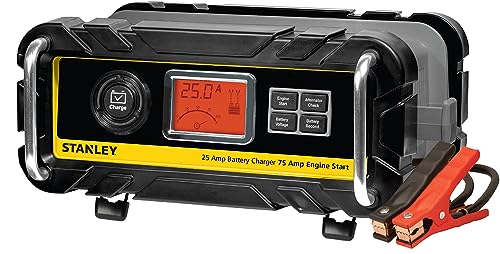 If simplicity is a prerequisite for the charger in your garage, this model from Black and Decker deserves consideration. Its onboard control unit can detect the voltage and type of battery attached, adjusting the charge it produces accordingly.

Its interface with the user is a simple set of lights. Yellow indicates a normal charge is underway, and green means the battery is charged. A red light indicates an issue – likely that the polarity is reversed.

What good is being waterproof?

A sealed body such as this is perfect for charging marine batteries, but it is also good for charging car batteries outdoors. There is also the accidental spill to consider. Like most other things users fret over, Black and Decker sought to eliminate those issues.

Unfortunately, this charger does not offer variable charge rates or a float-charge mode. If those are important features in your garage, other devices may better suit those needs. For batteries not completely discharged or anyone who doesn’t want to get an SAE certification to charge a battery, this charger is worth a look. 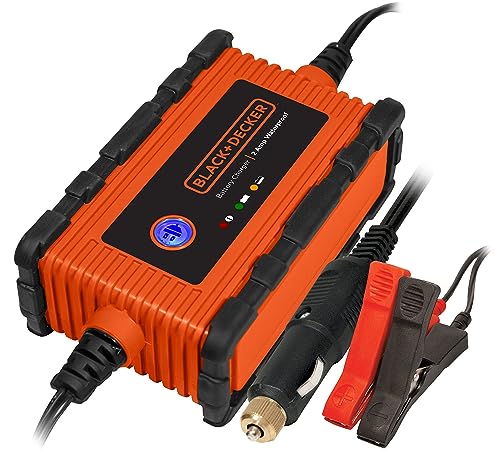 Some home mechanics enjoy getting super technical about every phase of car maintenance. Their battery chargers have every bell and whistle. For the less fussy car owner, there is KeyLine’s Mini Pro.

How does it simplify things?

The Mini-Pro cuts out the user’s need to keep switching between its several functions. Every time it experiences a new load, the Mini Pro simply runs through its five functions in order. First it desulfates the battery, shaking off any built-up lead sulfate from the battery’s plates.

The desulfation stage reduces the time it takes to charge, making up for the charger’s relatively slow, .75-amp rate. The next phase is bulk charging, followed by absorption, analysis and float stages. If left connected to the battery, the Mini Pro will detect a drop in voltage and initiate the five-step charging cycle again.

The simplicity is complimented by a suite of protective features. The Mini Pro automatically detects reverse polarity and electrical surges. It is also sealed and has an anti-spark feature. If you are not in a hurry for a charge (and you really never should be), this battery charger likely does everything you’ll ever need it to. 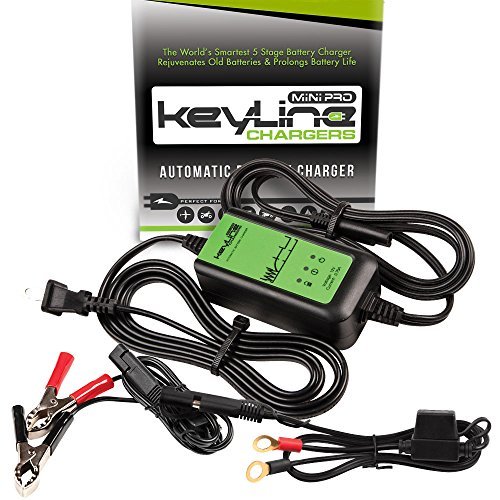 Schumacher’s SC1307 is the battery charger for those who don’t want to fiddle with their battery charger. This compact (though heavy for its size) unit packs in more functionality than most of its competition, remaining storable in even in tight spaces like one-car garages or small sheds.

Despite its size, the SC1307 packs serious features.

To start with, this charger detects the voltage of whatever battery you attach to it, automatically selecting the proper charging amps (2, 6, 30 or 85 for jump starting). The onboard microprocessor still needs the operator to tell it which type of lead-acid battery it is charging, but it does everything else more or less on its own. It even detects the presence of an alternator on a running engine, and can diagnose the alternator’s health.

This charger works well for all lead-acid and VRLA batteries, but it is not meant for lithium-ion batteries. Small batteries – such as those found on motorcycles and ATVs – benefit from the automatic float-charge function, as they finish their charge under minimal flow to reduce heating. The same function works to maintain a charge on any fully charged lead-acid battery. 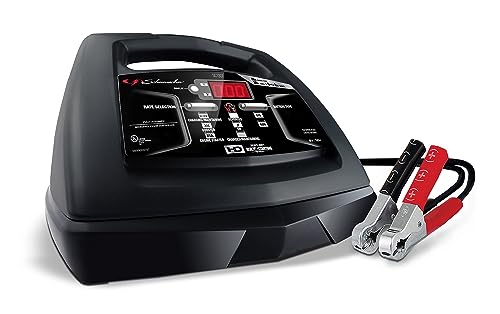 Once upon a time, there was only one type of car battery, requiring only one type of charger. As more battery types entered the market, we began to ask more of our chargers. In the modern age, the best car battery charger combines multiple functions with automated usage.

To answer this question, it helps to understand the basics of car (or motorcycle, or ATV, or lawnmower, etc.) batteries. Batteries do not store electricity. They use chemical reactions and convert that energy to electricity when there is a draw.

Most batteries are lead-acid types, such as the common flooded car battery. Inside these batteries are lead plates that sit in an electrolyte solution – typically sulfuric acid. The plates are coated in one of many available materials to facilitate a chemical reaction in which a resulting imbalance in electrons causes them to flow from the negative to positive plate surfaces by way of the external terminals.

Charging a battery simply reverses that electron flow. The electrons move from the positive plate surfaces to the negative terminal. Hydrogen sulfate that was formed on lead plates gets suspended in the electrolyte again. The battery is now charged, and the chemical reaction can reoccur.

The simple batteries we just described have open cells so the electrolyte can be refilled. These vents allow the gases produced in the charge-discharge cycle to be expelled. Some newer types use a valve to vent the gases. These are the valve-regulated lead-acid (VRLA) batteries.

Rather than a liquid electrolyte, these batteries use a jellied substance to prevent spilling. Because it doesn’t evaporate, the gel never needs replenishing. Gel batteries have their own safe charging range to prevent overheating (about 14.3 volts).

Absorbed Glass Mat batteries use rolled fiberglass sheets soaked in electrolyte. These batteries allow for the efficient flow of electrons, though charging is still required. An AGM battery can tolerate roughly half a volt more than gel batteries without overheating (about 14.8 volts).

While most vehicle batteries will fit into one of the above categories, but some other possibilities exist. Because lithium is such a reactive metal, some modern batteries (called lithium-ion) use it in their construction. Light and quick-charging, lithium-ion batteries have particular voltage requirements. Few chargers can handle both lithium-ion and lead-acid applications.

Usually the alternator on a car will produce sufficient electricity to keep the battery fully charged. However, there is normally a small draw on the battery from devices like clocks that depletes the charge. Batteries also spontaneously discharge. When enough time passes, car batteries should be recharged with a battery charger. Repeated deep discharges kill batteries dead.

Modern battery charges often have onboard computers that can take a lot of the guesswork out of the process. Depending on the model, these devices may detect battery type and prevent silly errors like reversing the positive and negative hookups. They may also help remove the sulfur deposits that can build on the lead plates and prevent recharging.

Critically, these smart chargers can also vary the rate of charge. High charge rates are fine for deeply discharged batteries, but heat becomes a problem as the charge gets closer to 100 percent. Smart chargers automatically reduce the charge rate at that point, preventing overheating.

Choosing the best car battery charger means ensuring the device can charge the battery type you have. Small equipment and powersports have individual requirements, which are different from large diesel trucks, for example. Some chargers can do one thing better than another, while others can handle anything thrown their way.

If you are unsure, inspect the battery in your vehicle and figure out which type it is. Lead-acid is most common, but others exist. Make the battery type your main criteria, then select for the functions that best suit your own needs.